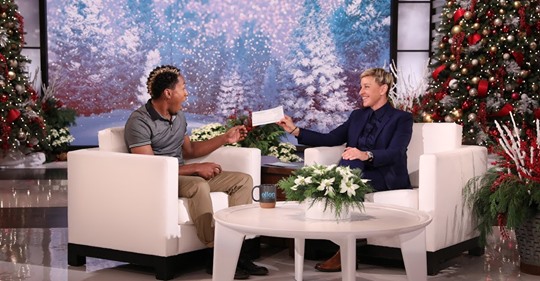 Ellen’s Greatest Night of Giveaways – One Lucky Sign Spinner Gets $100,000 and a New Car!

Rico El-Lis is known for being a viral, sign spinning sensation on street corners across The City of Angels. If you haven’t seen him before, he is bursting with positive, youthful energy and has a one-of-a-kind personality. Certainly one of the best sign spinners in the world, it was only a matter of time before someone noticed his talent. Of course, no one could predict the he would catch the attention of none other than Ellen Degeneres.

Sterling K. Brown showed up in person to spin signs with Rico and surprise him with a big gift from Ellen. Unknown to Rico, Sterling would take him to a dealership and let him pick any car on the lot to take home. Click the link the below to check out Rico ultimately went with, the choices were overwhelming. Karma comes in all forms, and you never know when it will come your way. Shout out to Rico for being the best he could be!

Aside from giving Rico a brand new car, Ellen also invited him on the show for more even more surprise giveaways. She had a quick sign spinning lesson and then announced she was giving Rico a cash reward of $100,000, that’s more money than any sign spinner sees in a year! So much energy and even more emotions, check it out for yourself!

Ellen Welcomes Back Rico from ‘Greatest Night of Giveaways’