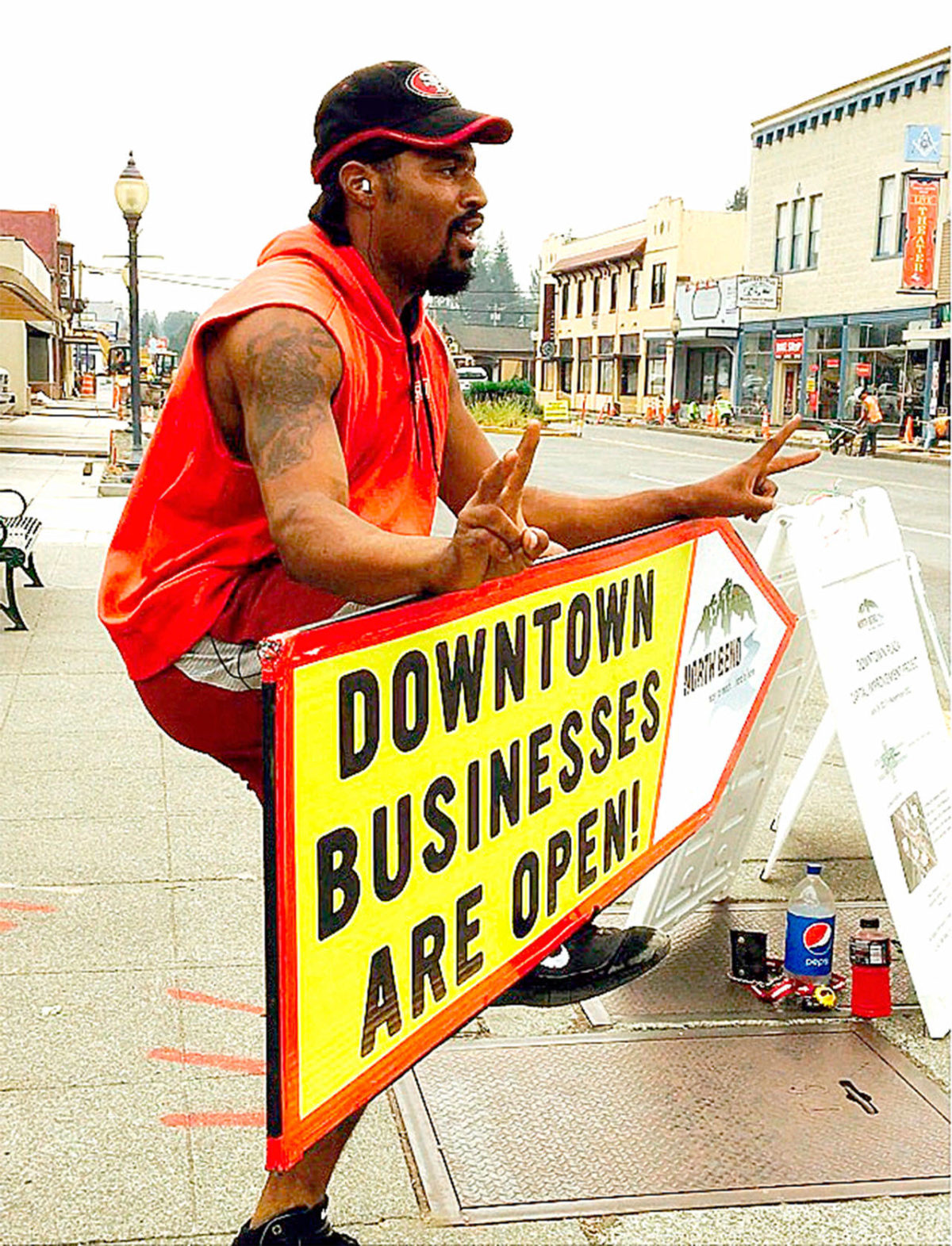 Downtown North Bend businesses are open, despite the construction work along North Bend Way. That’s the message the city of North Bend wants to get out to everyone who drives through town.

That’s also the message on the whirling and flipping sign that Tony Sims is using to direct traffic to those businesses, from his post at the corner of Bendigo and North Bend Way. Although North Bend Way between Bendigo and Ballarat Avenue is currently torn up for an infrastructure project to bury utility lines and replace the sidewalks and street trees, shoppers can still reach the businesses on those blocks through the alleys behind the shops.

Sims, a sign spinner from AArrow Sign Spinners, is doing his best to let people know that. He also sings, dances and does cartwheels to draw attention to downtown.

“I love being here! The people passing by and working here are so nice,” he said Friday. “One business owner (Nancy Wray from Birches Habitat) even brought me lunch.”

His appearance, scheduled for the next week or so, was in response to comments from two business owners at the Sept. 5 North Bend City Council meeting, about the impact of construction on their businesses.

Steve Teodosiadis of Georgia’s Bakery and Sharon Hockenbury of Twin Peaks Nutrition and Wellness both said their business had already been reduced significantly, and urged the city council to do more in helping the businesses that are in the center of the plaza construction project.

“We were promised an effort by the city to bring people downtown,” Teodosiadis told the council, through a variety of outreach methods, but he said the only thing he’d seen was a single 8-1/2 by 11-inch piece of paper, taped to a sawhorse, announcing that businesses were open.

“I was hoping for a bigger effort from the city,” he added.

Hockenbury seconded his comments, adding that more public parking was the greatest need.

After hearing from the business owners, several council members commented that they did want the city to take additional steps to support the businesses.

“We wanted to be proactive so we put up signage and sandwich boards stating businesses are open and hung 40 balloons on the signs before construction began,” Mark Rigos, North Bend Public Works Director, said. “After hearing public comments, I decided to also hire a sign spinner to draw even more attention to the open businesses.”

The goal of the downtown plaza is to create a safer environment for pedestrians and traffic through the downtown corridor.

“The city is doing what we can to help promote downtown businesses during construction,” Rigos explained. “Please tell your friends and family to come down and support your local businesses.”

Rigos said he spoke with Snoqualmie Valley School District Transportation Director, Jim Garhart, to inquire if the buses were experiencing issues getting children to school during the construction.

“Jim told me they are not experiencing any major issues navigating the construction and that they are looking forward to seeing the completed project,” Rigos said.

East North Bend Way from Bendigo Boulevard to Ballarat Avenue North will be closed until Sept. 26. Traffic is being detoured around the intersection with signage to direct people around the project site during the closure. Businesses remain open during construction.

Mikhael Aguilar-Portillo is the February Sign Spinner of the Month!
February 27, 2019