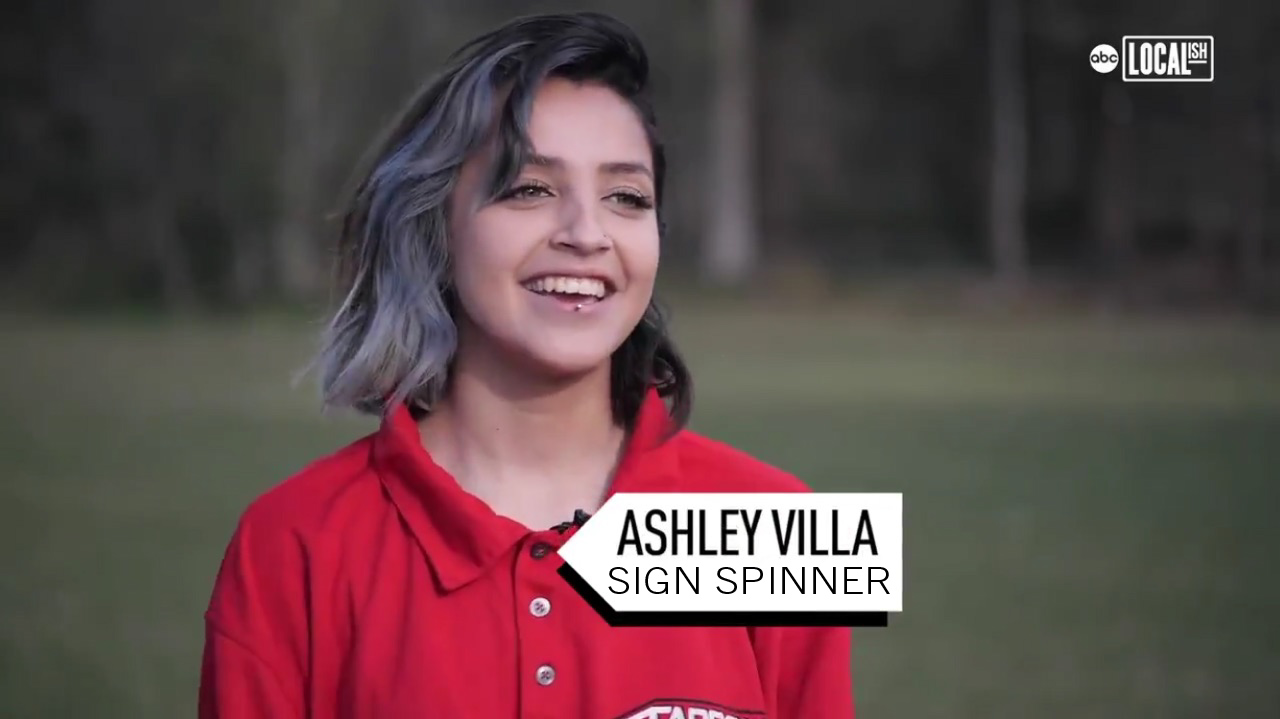 Back to the Lone Star state to feature one of our most dedicated up-and-coming sign spinners out there. This spinner regularly braves the harsh Texas elements, goes the distance to get the job done, and constantly pushes herself to the next plateau. She is an inspiration to all female sign spinners everywhere and proves that girls can bring it just as hard as any of the guys. Ashley Villa, Thank you for going above and beyond the call of duty, YOU are October’s Sign Spinner of the Month!

Ashley’s sign spinning story begins almost 3 years ago in Sacramento, California where she was originally introduced to sign spinning by her boyfriend Elijah Scholz and his brother Danny Partida. But enough about them, this is Ashley’s story. Her strong background in dancing is what drew her to sign spinning in the first place, as it gave her the same freedom to express her self and jam out to music, it was like hooping but different. A job where you have the freedom to flow to the music and be around other cool people who are trying to do cool things was exactly what she was looking for. Now sign spinning provides her with a creative outlet, gives her days a purpose, and a passion to move forward. She hopes to be able to inspire future generations of spinners and encourage other girls worldwide to pick up a sign!

Now, 3 years later at 20 years young, Ashley has traveled the country spinning signs and currently resides in Texas and helps run the Dallas/ Fort Worth market. Since starting her sign spinning career, she gone from Sacramento, to assisting operations and development in the San Francisco Bay, Houston, and Washington, D.C. Her favorite tricks are all the suitcase transitions and variations; she’s also got some mean body ties. For her, she’s just getting started and one day hopes to be the first female spinner to win the World Sign Spinning Championship! Until then, who knows where her sign spinning career will take her?

When Ashley isn’t sign spinning, she’s typically jamming out to EDM and other electronica genres. In the future, she aims to produce electronic music as she has a strong passion in the industry itself. She’s also a huge anime fan and gets down to J-Pop on the side; and likes to make AMV’s in her free time, since it combines her love of music and animation. Her favorite Pokemon is Magikarp because no one takes a Magikarp seriously, but has the untapped potential to evolve into something dynamic and powerful, I’m sure we can all relate. She is definitely in the pineapple on pizza club as her favorite pizza is Hawaiian; an excellent choice. When asked if she has any words of wisdom out there for all the sign spinners, she answered, “Don’t be afraid to chase your dreams and never stop dreaming!” This hits home for a lot of us Ashley, again thank you for all you do and don’t stop chasing your dreams either 🙂