Back to Blog Home Posted by Arnaldo Acosta on 3.2.17 in AArrow News, Houston

The Houston area claims two gold medalists from the last Olympics, but you may not know that there’s also a “medalist” sign spinner who lives in Houston. 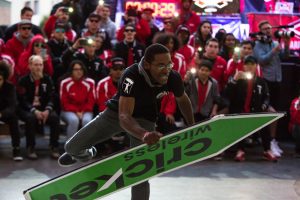 Fresh from the international competition sponsored by AArrow Sign Spinners, Ray Rivera took third place in what he considers the Olympics of his profession.

“I won first place a few years ago, then second. This is the first time I took third,” he said.

Spinners can be spotted at high-traffic intersections. Some have even have additional hardware — also called a spinner — attached to the marketing signs.

“It makes it easier for the person to just stand and let the sign turn around on its own,” one said.

The AArrow spinners throw their athleticism and personality into the jump. They turn cartwheels while balancing the lightweight signs.

“It’s all about me,” said Rivera. “When you’re at my intersection, I own the show,” he laughed.

“It depends how much work and training you want to put into it,” he added.

AArrow trains its spinners, some of whom also work in sales for the company, which increases their checks.

They gauge their effectiveness by how many customers show up in the stores they advertise.

Spinners also said the people who respond to their gestures by honking their horns are a fun payoff. 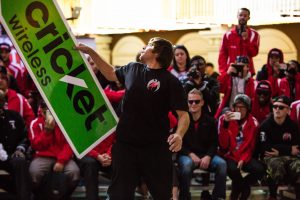 “We want to make every person’s day as good as we can,” said Nicholas Jaramillo, who waves and smiles at drivers as they pass his corner. “It’s not just for us or the clients. We want to leave a smile on your face.”