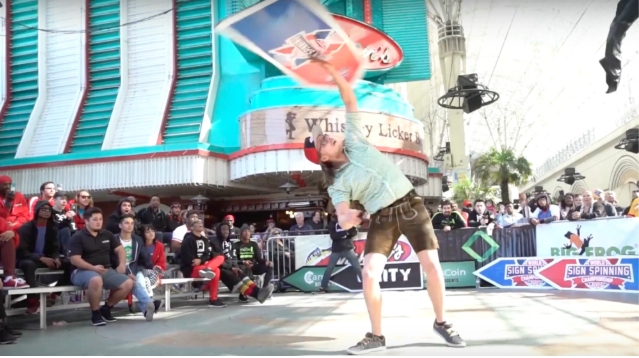 Once just a low-wage job for teenagers outside of sandwich spots, sign-spinning is now a fleshed-out and fiercely competitive sport.

Twenty-year old Kendric Washington isn’t able to fully describe the maneuver that earned him AArrow’s 2018 sign-spinning world championship, but he’s willing to try. It starts with a back handspring, with the cardboard in between his legs, until he’s completely upside down. It ends with him on two feet again, defying everything you and I ever assumed about the restaurant advertising industry. “The only way I’d really be able to tell you what it looks like would be to do it,” laughs the Washington, DC native over the phone with MUNCHIES on a balmy Thursday morning. Washington still hasn’t coined a name for the trick, ostensibly because no words have matched its drama or degree of difficulty. Regardless, it made his final routine unimpeachable, and it secured the $5,000 grand prize. 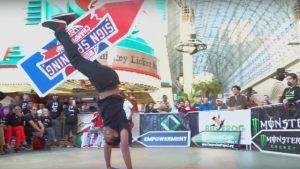 Washington started spinning for AArrow Sign Spinners after he was recruited out of high school. AArrow itself is a company that was founded in San Diego in 2002. They recruit and train kids in the art of the cardboard—these long, technical routines that are part breakdancing, and part ballet—and then send them out to a considerable list of clients that includes everyone from Carl’s Jr. to the Washington Wizards. By hiring a third party, restaurants are able to put a professional, athletic twist on the sad, grueling work of the blockside charlatan. That makes a lot of sense. I worked in a Round Table Pizza as a teenager, and the 15-year old sister of one of my co-workers was routinely handed a sign and dispatched to the intersection for long hours and sub-minimum wage. This is the reputation that sign-spinning has carried forever. You can’t go much further down the totem pole than being the guy with the poster board outside of the Little Caesar’s.

But AArrow is different. Mike Patterson, the person who hired and trained Washington, tells me that the adult sign-spinners in the company are paid full-time, including benefits, with wages starting at $15. The work itself is also considerably artistic. Take a look at the highlights from the 2018 championship; alongside Kendric’s brilliance, you will see people helicopter their signs in the air, whirl them on top of their head, and bounce them between their legs like a basketball. It’s insane, and it immediately convinces you that this particular craft categorically deserves its own tournament.

“There’s a lot more to this than what you see on the corner,” says Patterson. “A lot of our guys make highlight videos, they’re all on social media and challenge each other back and forth. I’m 35, and I still challenge people, because it’s a matter of pride for us. If we’re gonna be out there, we wanna be the best advertising force in the world. When you see someone out there with a sign and you think, ‘Man, I would hate to have that job,’ we’re doing everything we can to avoid looking like those kind of people.”

Since 2006, AArrow has hosted the World Championship in Las Vegas, as a way to both excite their employees and also distinguish the company’s product from the other, less-bouncy sign-spinning institutions in the world. Washington, who had a background in skateboarding, attended his first tournament a year ago, where he placed in the top 13 out of 500 competitors. He chalks up his 2018 win to his discipline—every week he spent hours off the clock mastering the physics and nuances of the sign, until it felt like an extension of himself. “At the end of the day I don’t think I’m the best at sign-spinning,” explains Washington. “Even though I’ve almost perfected the craft, I’m still a rookie at heart, even though other people think I’m a god.”

Today, Patterson tells me that he believes Washington stands as one of the greatest sign-spinners of all time, as far as that sort of thing can be codified and delineated as a sport. “I was in tears at the world championship,” he says. “I’ve never seen anyone work as hard as he does.” Patterson adds that he hopes that AArrow creates a sustainable ecosystem for anyone who starts out as a spinner. After all, he, too, was on the block once upon a time; now he’s recruiting kids into his way of life and enjoying an office job. So perhaps, one day, when Kendric can’t hit a backspring in the way he can now, he’ll have an afterlife in sales, or training, or merchant relations. Imagine that, the business of sign-spinning subsisting you for an entire career.

For now though, Washington is enjoying life as king. Recently, he’s gotten into photography, and he imagines a future where he travels the country, taking photos, and picking up spinning gigs where he can find them. “I’m gonna be doing this for the next three years,” he says. “I thought, ‘Why not buy a camera with the prize money?'”

The universe has a way of rewarding transcendent greatness, even when it’s found in unexpected places, like the sidewalk down the street from a Firehouse Subs. Bless you, Kendric—keep showing the rest of us how it’s done.

2020 World Sign Spinning Championship – A Special Thanks to the Sponsors!
January 31, 2020