Tyler Cartwright is December’s Spinner of the Month!

There are so many amazing sign spinners in the AArrow family, but Tyler Cartwright is having a pretty big year! That’s why he’s our Spinner of the Month for December, and here’s an interview with the man himself. (Interview has been lightly edited for clarity) 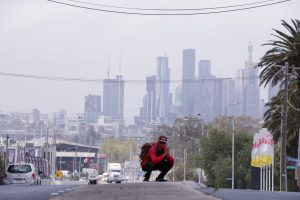 Hi Tyler! First, how long have you been spinning?
I’ve been sign spinning for 6 years, and have worked with AArrow for almost 4 years (January 2015 was my start date).
Where did you start sign spinning? What cities have you spun in?
In that time I’ve traveled as a sign spinner from my home town of Augusta, GA to Atlanta, Nashville, Houston, Austin, San Antonio, Denver, Los Angeles, San Francisco, Las Vegas, New York City, Philadelphia, Baltimore, Washington DC, Melbourne, Sydney, Busan, and Seoul.

Wow, that’s a lot of cities. What’s your favorite place to spin?
My favorite place to spin is my personal practice spot on the Lady Antebellum Ampitheater stage in Evans, GA but I really enjoy getting to travel and spin in locations seen in popular sign spinning videos.
So what kind of music do you like to spin to?
My favorite music genres that I listen to on the corner lo-fi hip hop music, j-pop, k-pop, classic rock, ambient, indie, and alternative. They really help the time go by.
Tell us about yourself! What’s your favorite food? What are your hobbies?
My favorite food is tteok-bokki. My favorite hobbies are practicing photography, making sign spinning videos, playing video games, playing drums, and studying Korean.
You’ve been doing a lot of travelling this year. What have you been up to?
The past 3 months I’ve been sign spinning in Australia and Korea and have trained spinners in both countries. I’ve done just about everything there is to do in AArrow from being a Spinner to GM to Spinstructor to Recruiter to Sales Rep to Graphic Designer to Sign Producer. 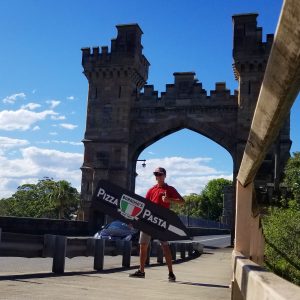 You took 2nd place in the WSSC this year. What other competitions have you been in?
I’ve been to WSSC three times, gotten 20th in 2016, 7th in 2017, and 2nd in 2018. I won most improved in 2016, trick of the year and spinners choice in 2017, and won the battle royale at the 2018 TSSC. I was also a judge at the 9th annual KSSC once and I plan on attending again this year on December 29th.
Thanks a lot Tyler, see you at the WSSC!
Follow Tyler on social media!
http;//youtube.com/tcartt
http://instagram.com/tcartt
Categories: AArrow News, Atlanta, Austin, Baltimore, Denver, Houston, Las Vegas, Los Angeles, Nashville, New York City, Philadelphia, San Antonio, San Francisco, Washington D.CDecember 27, 2018
Share This Article
Share on FacebookShare on Facebook TweetShare on Twitter Pin itShare on Pinterest Share on LinkedInShare on LinkedIn