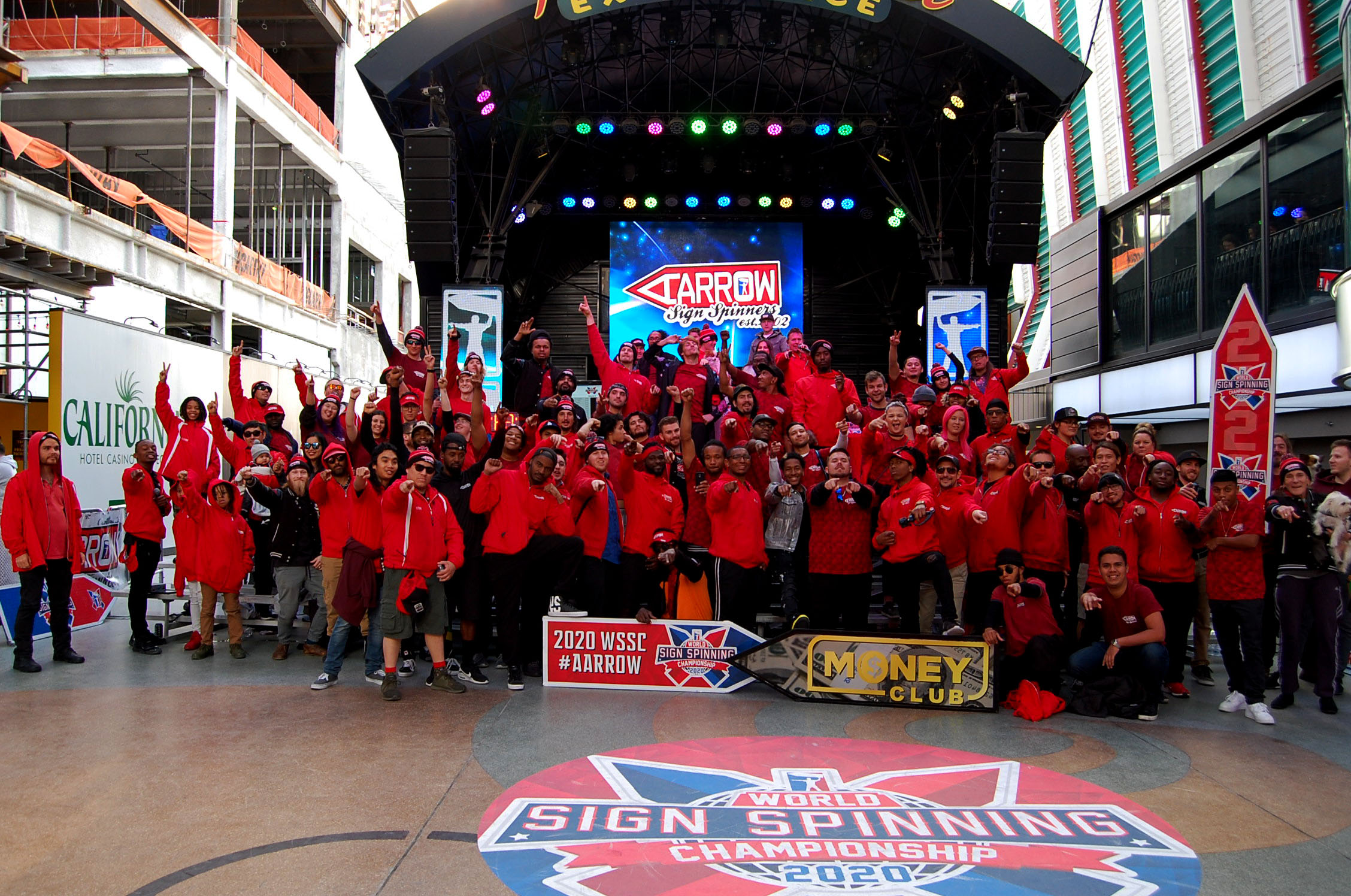 Every year the World Sign Spinning Championship gets bigger and better, this year was no exception. Fremont Street was alive with energy in downtown Las Vegas as some 60 of the best sign spinners from all over the world would battle it out for the title the 2020 World Sign Spinning Champion. Drawing inspiration from Martial Arts, Break Dancing, Skate Boarding and a great many other extreme sports and performance arts; sign spinner’s would captivate the crowds with a display of some of the most mind blowing sign spinning maneuvers ever seen.

Three rounds and 60 spinners total, each round spinners would be eliminated until a champion would be crowned. In the first round, competitors would have only 30 seconds to stand out from the rest of the spinners and only 25 would qualify and move on to the second round. This year was the most impressive first round to date as no one was holding back, a half point could be the difference in advancing or going home. In the round two, Veteran sign spinners, former champions, and new faces were playing for keeps and unleashed everything they had for their chance to make it to the final round. Many early qualifiers would get bumped out by spinners marginally improving their scores in the second heat, it was absolute madness. This year was even harder to judge than the last; many wouldn’t be envious to be in their shoes.

Sign spinning is judged on 3 different categories by 3 different judges; leading to a maximum possible score of 90 points.:

The 3 judges are usually veteran sign spinners, former world champions, or even household favorites; all of which are usually sign spinning legends with their own unique stories to tell. This year the judges consisted of:

The Final Round – Only 10 of the best spinners from around the world would remain. This year’s final round was brimming with talent, definitely the fiercest sign spinners in the world. Former WSSC winners, first time competitors, crowd favorites, and other sign spinning legends would all spin their hearts out for a shot at the title. Scores were within hairs of each other, varying from fractions of a point. In the end, there could only be one – Kendric Washington with his signature aerial tricks would get a damn near perfect score and snatch first place from the clutches of the contenders. Big Shout out to Kendric for being the 2020 World Sign Spinning Champion, his second year winning. Enjoy the bragging rights and the title; we’ll see you next year at WSSC 2021!

Click here to check out the story on NBC Las Vegas.

Click here to check out the story on CBS Las Vegas.