The Signs of A Cooling Market in California 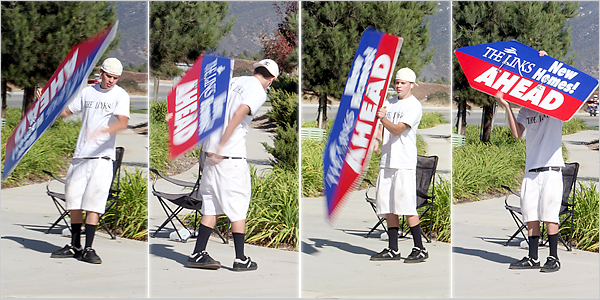 ON a scorching fall day, as Santa Ana winds thrashed the palm trees around the parking lot, Nick Victorio inspected his group of teenage recruits. His mission was to set down the rules for wrangling a real estate sign.

The arrow-shaped signs, at 2 by 6 feet, were wider than most of the new employees were tall, and Mr. Victorio told recruits not just to hold the signs, but to also spin them, flip them, even dance with them — whatever it would take to lure a home buyer.

“It’s going to get windier than this out there,” Mr. Victorio said as a gust pushed the trees sideways. “If you don’t drop it,” he said, “you’re not working hard enough.”

As the housing market cools here in the exurbs of Los Angeles and elsewhere, builders are relying on the frantic motion of these young workers to catch the attention of a dwindling number of buyers. In some cities, it is common on weekends to see six or seven sign twirlers — “human directionals” in industry parlance — on a single street corner, pointing the way to sprawling fields of newly framed houses.

The typical employee is male and 15 years old, and he stays on the job for two or three months, according to Mr. Victorio. The plastic signs weigh 5 pounds, but by the end of the five-hour shift, he said, they feel like 15.

Still, some twirlers say it can be a good job.

“It’s pretty good hours, good pay,” said Sierra Butler, 15, a sign twirler in Yucaipa. “It’s a really easy job to start the working experience. That’s why I did it.”

Typically, the companies offer incentives to employees for good performances. The pay starts at $9 an hour, about 30 percent more than minimum wage in California, which is now $6.75 an hour, and it can go up to $16 an hour for top performers.

Clearly, the practice satisfies basic tenets of advertising: It’s close to the point of purchase, it’s surprising and it’s flexible.

“You have something that’s grabbing your attention at the time you’re interested in it,” said Dominique M. Hanssens, executive director of the Marketing Science Institute in Cambridge, Mass.

But the twirlers have their detractors. Their antics have become so visible — and to some local officials, so annoying — that about half a dozen cities in California have taken action to ban them.

Mr. Victorio manages 200 sign twirlers for Creative Outdoor Advertising. The company is based in Riverside, a fast-growing city in which the practice has been banned.

Typically, city officials say that the twirlers not only pose a traffic hazard by distracting drivers, but also create blight.

“This got a little bit out of hand,” said Mark Lewis, mayor of El Cajon, a city in San Diego County that banned the practice earlier this year. “They’re very artistic in regard to swinging the sign around, and some people felt a little endangered.”

Mike McCullough, vice president of marketing for Eventz Extraordinaire in Lake Forest, said the company supplied 600 workers each weekend in California and Las Vegas, a 50 percent increase in business since last year.

“As the housing market has softened a little bit, that has been good for us,” Mr. McCullough said. Some builders have increased the number of directionals for each development, and others that did not use them have started using them, he said.

The unsold inventory of new houses in California has increased by more than 130 percent in the last year, according to Hanley Wood Market Intelligence, a housing research firm in Costa Mesa. In the third quarter of 2006, builders statewide were trying to sell nearly 18,000 homes either completed or under construction, according to Hanley Wood’s research.

Mr. McCullough’s company has not gone to court to defend the sidewalk advertising, but its lawyers routinely send letters to cities requesting that officials back off from enforcing their bans. “Our stance is that this is legal,” he said.

Sharon Stanton, administrative director of pupil services for the Corona-Norco Unified School District, said the district stopped issuing permits for sign twirlers because of concern for the children’s safety.

“I’m waiting for the day a student is standing on a street corner and is abducted,” Ms. Stanton said. “We want our kids to have jobs, but we want them to be safe.”

Mr. McCullough of Eventz Extraordinaire said that the trouble in securing work permits presents a far greater problem than restrictive ordinances. “That makes it tough,” he said, “because we have to hire adults, and it’s harder to get adults.”

These days, Mr. McCullough said, about a dozen companies dispatch twirlers to developments in Southern California and in other warm climates like Arizona, Nevada and Florida.

But Mr. Hanssens said all these workers could eventually saturate the landscape.

“You hit that point when the consumer starts to expect the human directional, and it becomes so much a part of the scenery that you don’t see them anymore,” he said.

That is one reason the companies grade their twirlers and offer incentives for performance. Companies employ field supervisors who routinely critique the employees. Sign twirlers can expect to see supervisors every day they work.

Tom Thomas, a field supervisor for Creative Outdoor Advertising, spent a good part of a recent Saturday morning working to motivate his 14- and 15-year-old charges. As he made the rounds at a development in Yucaipa, he made notes on a checklist.

First, he made sure they were in uniform: white golf shirt, white pants, white shoes. Then, he made sure that they had enough water to last through five-hour shifts on sun-battered street corners. Then, he assessed the most important part — performance. He gave each employee a score on a scale of 1 to 10. If workers score below 5, the company fires them.

On his initial round, Mr. Thomas was largely disappointed. The first youngster was sitting down. The second one was sitting down as well, and he had no uniform and no water.

Down the road, the third teenager was standing but not moving. The fourth, Mr. Thomas was happy to see, was smiling and rocking the sign. But at the next corner, he nudged a lackluster young man who was stationed across the street from a dancing competitor.

“You’ve got some competition,” Mr. Thomas told him. “You’ve got to do something that sets you apart.”

Alicia Myers, who has been waving signs for 10 months, said that keeping in motion is key to making the best of the job. Ms. Myers, 27, works as a nanny on weekdays and spends weekends working as a sign twirler in Loma Linda. She carries a small case of water and a shower-proof radio to work.

“It does look easy, but on some levels, it’s not — like standing in the weather,” she said.

“It’s whatever you make of it,” she added. “If you stand out here and be boring, it’s going to be a bad day. If you have fun, it’ll be the best day ever.”