You are here:
BlogEurope 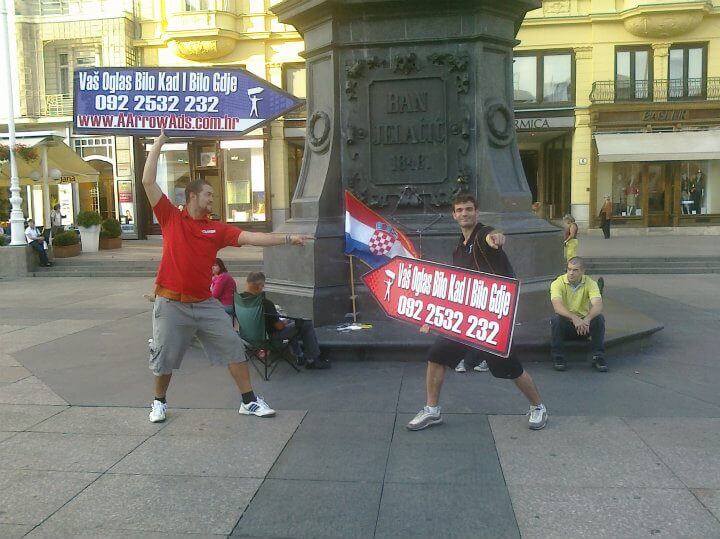 Thanks to Mario Knezevic, owner of AArrow Croatia, sign spinning has become a huge hit in this small country. Knezevic noticed the attention that sign spinning was receiving in America and other parts of Europe and decided that this acrobatic form of advertising would do well in Croatia.

“I immediately knew that this was a job for me. I have found on their web site and sent them a mail in which I wrote that I’m Croatian and I would like to deal with it.  It’s been a few days and I got the answer, ” said Knezevic admitting that he was surprised by the quick response from CEO, Max Durovic.

Durovic, was thrilled that someone was interested in expanding his franchise into Croatia, especially since Durovic has roots that tie him to the Croatian region.

The very first client that the AArrow Croation team took on was in a City Center shopping mall, which quickly achieved the positive attention that Knezevic had hoped for. After this campaign, the company took off and Knezevic and his team took on campaigns for major companies like T-Com, Green Gold and Techno markets.

In order to continue to be the top-notch company that they are, Knezevic recognizes the importance of training his sign spinners. “Training three times a week, a spinner in a month must meet a certain number of points and learn a number of tricks,” said Knezevic. There are over 450 tricks that spinners can do, adding their own twists and unique touches to help them stand out.

Although individuality is commended, there is a set of rules that each spinner must follow. According to Knezevic, the spinners must never wear sunglasses, must always smile and wave to people and must perform tricks that will convey the message that the business was aiming for.

Sign spinning allows the interaction between the business and the consumer, which is why clients are using AArrow for store openings and other important events. “The advantage of Aarrow advertising is that it can be anywhere and anytime, and the campaign can be implemented very quickly,” says Knezevic. Sign spinning is quickly growing form of advertising that continues to make its mark all over the world.