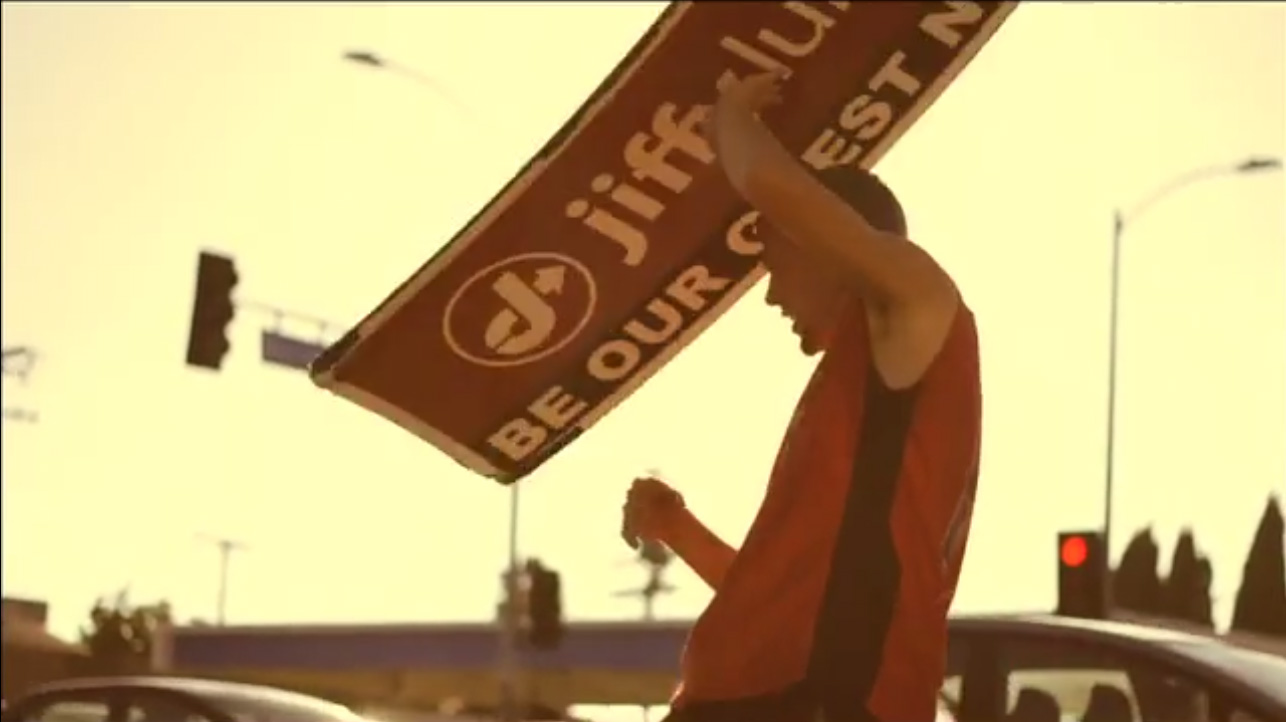 An exciting new film directed by Erik Barnes and written by Cami Delavigne about two teenage sign spinners and a young, single mom.

Hey everyone, welcome to the halfway point of our Kickstarter Campaign!  To celebrate, here is the original Teaser I made to get the ball rolling on the film.  Enjoy!

Spinners is a film that follows a day in the lives of two teenagers (Jace and Derek) who work as sign spinners, the only job they can find.  Jace mulls over the harassment local bullies put him through and decides to take things into his own hands. A single mom steps in to help Jace in an unorthodox manner. The story takes place in a small desert town, decimated by the economic recession, staggering losses in home foreclosures and illegal gun trade, where good people are forced to make hard decisions and tough choices. While full of dramatic tension and high stakes, the film maintains a healthy dose of humor and a touch of heart.  In the end, it is a story of hope.

Remember, we only get the funds if we meet our goal of $10,000.  If we fall short, we get NOTHING.  The money we receive from this Kickstarter goes directly into the production of this film. In other words, development is almost complete. The script is finished. We have already assembled the major roles of the production staff.  We have already begun casting and location scouting. Although we are drawing upon very limited funds to do so, the production so far is fueled by a powerful enthusiasm for the film.  Once we receive funding, we launch immediately into production.  That means equipment rental, housing, food, transportation, etc.  We begin shooting within a matter of days.  Also, the money we receive from Kickstarter will pay for our post-production needs, including color-correction, sound mix, music composition, and finally Festival submissions.  Fortunately, we are able to save a bit during the editing, because the director has such a strong background as an editor. This helps take a large chunk out of our budget.

Making a quality dramatic short film has been a dream and aspiration for Erik for all of his adult life.

Erik studied film while attending the Rhode Island School of Design and upon graduating, has consistently worked in the Film, Television and Commercial Industry.  For over seven years, he has been an Editor for Broadcast Commercials, cutting TV spots and Web Content for such high profile clients as Toyota, Coca-Cola, Microsoft, and Sony to name just a few.  He has also directed music videos for many bands including TV on the Radio and Trans Am. In the last two years he has directed a number of short form documentaries for such acclaimed institutions as The Getty Museum, New York Times Magazine, the Los Angeles Museum of Contemporary Art (MOCA), and the Hammer Museum. All of Erik’s work is available to view on his website: http://erikLbarnes.com

LA-born Cami Delavigne wrote BLUE VALENTINE, the story of a doomed marriage, with director Derek Cianfrance. The film, starring Ryan Gosling and Michelle Williams, was released in 2010 to critical acclaim and garnered Williams an Oscar nomination for her role as Cindy. In 2012, Cami wrote the Sundance short, FAMOUS PERSON TALENT AGENCY, about a talent agent with no razzle-dazzle. Currently, she is writing a thriller for Focus Features, and an original TV pilot ARM CANDY. She also teaches screenwriting to some very lucky students at NYU.

As the creator and driving force behind Commonwealth Projects, Daniel has produced a number of films for such high profile artists as Doug Aitken, James Franco, Hedi Slimane, Kenneth Anger, and many others. Commonwealth has also produced a number of various projects such as art installations, product launches, short films, interactive displays, artist books, and much, much more. Give yourself a treat and get lost in the astounding number of diverse projects on their website: commonwealth-projects.com

Alesia has produced and directed music videos, short films, case studies and product launch media. Her work for corporate clients including Panasonic, HTC and Microsoft has taken her to Europe, Japan and many of the 50 States. She has also post-produced graphics packages for the Emmys as well as visual effects for commercial clients. As the Events Chair for Women in Film Seattle for two years Alesia also orchestrated a number of events and sponsorships with film festivals, distribution companies and local businesses. See her feature directorial debut  –www.lookatmethemovie.com

Kristin is a Los Angeles-based actress working in theatre, film and tv. Her television work can be seen on American Horror Story (FX), Vegas (CBS) and the upcoming Masters Of Sex (Showtime). Recent feature film work includes: Promised Land (dir. Gus Van Sant), Pilgrim Song (dir. Martha Stephens, SXSW 2012), Save the Date (dir. Michael Mohan, Sundance 2012) and the upcoming Thou Wast Mild and Lovely (dir. Josephine Decker). Onstage Kristin has performed in theaters all over NYC and just returned from the famed Théâtre des Bouffes du Nord in Paris where she won critical acclaim in a production of Ondaatje’s The Collected Works of Billy the Kid. We are lucky to have her portraying our beautiful but damaged “Single Mom/Gun Dealer”. To see her extensive repertoire, visit kristinslaysman.comor http://www.imdb.com/name/nm3002605/

Nicholas began shooting as a tour photographer in the music industry.  He documented life-on-the road with Black Sabbath, Slayer, and Megadeath among others. Applying his live performance knowledge and eye for light, he became a lighting designer for a number of years in the Opera.  During such time, he also became a “go to guy” for Fine Artists interested in enlarging their live performance work and has Lit, Produced, and Stage Managed performances for artist such as Elad Lassry, Doug Aitken, Omer Fast, and many more.  Now focussing on motion picture, he has been excepted into the American Film Institute as a Cinematography Fellow and will begin his Masters this fall in 2013. http://www.nicholastrikonis.com/

Risks and challengesLearn about accountability on Kickstarter

Everyone involved with the making of this film, is doing it from their heart. Because its a project we believe in, we are committed to seeing it through. It’s a small film, but we did that intentionally. I believe it is better to give depth to something simple, than make a shallow “big” film. I would rather give our small film the attention it deserves and deliver something of star quality, thereby making a more powerful impact with our focused energy and time. Therefore, we minimize our risks and challenges. And to be frank, with the enthusiasm and heart that all those involved have towards making this film, once funding is secured, something truly beautiful and exciting is going to happen.