The District of Columbia is not just home to the nation’s capitol and a host of other important monuments, it is also the birthplace of Sign Spinning on the East Coast.  After their freshman year at Georgetown University, founders Max Durovic and Mike Patterson teamed up to bring AArrow to Washington DC.  DC Sign spinners were an immediate hit in the Washington Metropolitan Area and quickly expanded to cover the entire DMV region. AArrow has even supported political causes on

The Washington DC Office would be the foothold for the AArrow Sign Spinners on the East Coast. From there, AArrow would expand to Baltimore, North Carolina, Philadelphia, and Florida. Sign Spinners from the District of Columbia have been seen all over the East Coast, they would send the best sign spinners to spin the most exciting campaigns including spinning in Times Square in New York City. Sign Spinning Culture on the East Coast all started with 2 college friends in Georgetown.

Since starting in 2002, AArrow has provided countless opportunities all across Washington DC, Maryland, and Virginia. Some sign spinners have been spinning since they were teenagers and have stayed involved for over a decade. Some sign spinners have had the opportunity to travel the country, and travel the world in the name of sign spinning. Sign Spinners have been featured in commercials, Television, and made it on the news. Who knows what next big thing we’ll get to do!

Most recently, Kendric was featured spinning in a music video on Black Lives Matter Plaza in Washington DC. Check out our involvement with the BLM movement here!

Some of our favorite clients include:

Watch Jonathon Curry and Horatio Moreno of AArrow Houston bring the traffic in for Cricketâ€™s newest location in Alief, TX!

AArrow DMV joins the Washington Wizards as they make their journey towards the NBA Finals in 2018. Be prepared for a lot of fun and tons of amazing sign spinning!

Thank you so much for sending Eric to work at Orchard Square today. Several of the visitors mentioned they came in because of the “sign spinner”. Also, Eric did a special performance for a couple who purchased their home today, it made the celebration more festive. Please consider sending Eric again to the Orchard Square community, as it is always a pleasure to have his smiling face and positive attitude around us. Sincerely,

Ready to join a team of sign spinning street corner rock stars driving potential customers to businesses? You have come to the right place! Inquire about job openings with our Washington DC office through the form above. 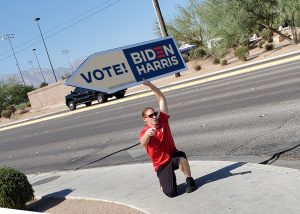 You may have seen them on the street corners for housing developments or cell phone stores. “Go hear, do this, buy that”; but have you ever seen a sign spinner try to earn your vote? So, this year was a first for many things. If you were in Arizona, Florida, North Carolina, Nevada, or Texas; […] 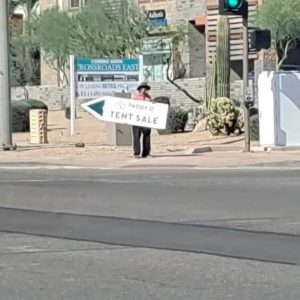 2020 has been a wild year. It is impressive that anyone could work 1300 sign spinning hours in 2020, yet alone doing it in the scorching desert. James Phelps, from Phoenix, Arizona, though. This man has dedication and whole gumption. That is why we are proud to announce the December sign spinner of the Month […] 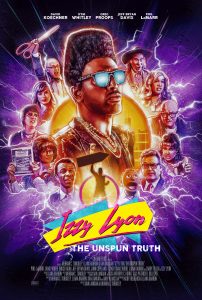 AArrow Sign Spinning Legend, Larry Fuller stars as sign spinner legend Izzy Lyon, in independent film – Izzy Lyon: The Unspun Truth. This mockumentary covers the life and career of Izzy Lyon, one of the greatest sign spinners of all time, and the mystery of his sudden disappearance. Izzy’s most dedicated fans recount his sign […]

Las Vegas, NV – This Month, we are heading to one of the most notorious AArrow Markets to recognize one of the many sign spinners who make it all possible. Las Vegas sign spinners are known to be something else when it comes to sign spinning, they really get it done! Jeffrey Overweg, you are […]