Every year AArrow gathers the best sign spinners around the world to go head to head and battle at the World Sign Spinning Championship . Normally this is a 2 day event taking place on Fremont Street in Downtown Las Vegas. Sign Spinners look forward all year to January for their chance to win the title of world champion sign spinner. We were lucky in 2020 as the virus hadn’t reached the US yet so we were able to watch Kendric Washington take first place for the second time. But things would look shaky for the 2021 World Sign Spinning Championship.

2020 was the year that we’ll never forget. The world was thrown into chaos during the Covid-19 pandemic, changing how we do things, especially live sports. To limit exposure, the NBA tried to commit to a “Bubble City” where all the players would play and coexist in a bubble in one city. The UFC attempted to do Fight Island, and have all the fighters be on a bubble on an island. And sign spinning, well we didn’t do any of that.

Now, I know you may be thinking “Is the 2021 world sign spinning championship happening this year or is it cancelled?” That answer is both a yes and a no. Maybe.

The passion for sign spinning still burns in every sign spinner out there. While we are able to still spin signs and hone our craft, we aren’t able to gather in large numbers. This year we chose to keep everyone safe but move the competition online to keep the sport of sign spinning alive. Competitors would submit 30-45 second spin videos and be able to use their creativity to make their video stand out.

Meanwhile, on the internet…

The best 76 sign spinners submitted video submissions to be judged by 2 of the most senior veteran OG sign spinners out there. One being the Legendary World Sign Spinning Champion Matthew Doolan, who has starred in countless commercials and music videos and is known for being one of the greatest spinstructors of all time. He is literally a walking tricktionary. Then the other guy, Greg Hakanson, he does the marketing. We keep him around because he’s fun. Between the 2 is over 30 years of sign spinning experience and the industry knowledge of what looks best and which tricks are the hardest.

You would think this competition would be a piece of cake to judge, seeing is it’s all online from the comfort of your home. Well, you’re wrong; it was the hardest competition to ever judge. By removing the live factor, everyone’s performance would increase since they were able to pick the perfect round without any drops. This would make the score to advance to the next round even higher, increasing the difficulties.

This year, there was no element of luck that could define a single round. Normally there is a lucky catch that pushes someone up or an unlucky drop that takes out a serious competitor. Without the crowd factor and any moments given to improv or chance, sign spinners had to overcome their own psyche. No one was able to see the other spinner’s performance beforehand, so no one knew exactly what they were competing against. The pressure was on and the little voice in the back of their heads was a bigger threat than any other phantom sign spinning round out there. Many sign spinners struggled with their internal crisis, to submit the video or to reshoot.

This would also be the most thoroughly judged competition, ever. Normally, judges have the same 30-45 seconds that the everyone has to watch and to score a round of sign spinning during the live event. This year, the judges were able to watch, and re-watch every video several times, critiquing every catch, trick, and foot-stance. In the end, all the entries were amazing, but some werejust better. It’s not that anyone didn’t try hard enough, it’s just that some sign spinners tried a lot harder to make their video unique and one of a kind.

Ultimately the best 25 sign spinners would advance to the final round (well 26 because there was a tie for 25th place.) The final round was encouraged for everyone to go all out and spin in epic locations to create the dopest sign spinning mixtape for years to come. Normally sign spinning is a performance art combined with street performance, so to put it into a video was challenging. But who is more creative than the best AArrow Sign Spinners in the world? These guys put all of their creativity into making their rounds the best!

This year, there was one sign spinner that pulled ahead of the competition, Jacob Mitchell scoring a damn near perfect round was clearly the victor. He was in his element and put some serious effort to craft the perfect run. He beat out 2 Former World Sign Spinning Champions that would have easily taken over the top 3 if Jacob decided not to spin. We always wondered when Jacob would win, and without a giant crowd or any moments left to chance, Jacob brought his A-game. Jacobs style brought new tricks that still haven’t even been named yet as he combined his aerial acrobatics and martial arts to the sign spinning arena.

Jacobs performance could only be described as mind blowing. He definitely raised the bar to the next level. It is note worthy to mention that former champion Kadeem Johnson had a flawless round as well and had a good shot at winning for a 4th time if Jacob didn’t unleash his all of his sign spinning fury. In 3rd place we have a new competitor Evan, that came out of nowhere to show everyone he can bring it. His performance only slightly outscored last year’s champion Kendric Washington who came in 4th. Many of the scores in the final round were only within a fraction of a point of each other, except for Jacob who was clearly the victor.

Hopefully things improve so we can get the AArrow family together again. The digital format was interesting, and will likely be used for future competitions. But there is just something missing about the live event that makes it special. Until next year, keep spinning! 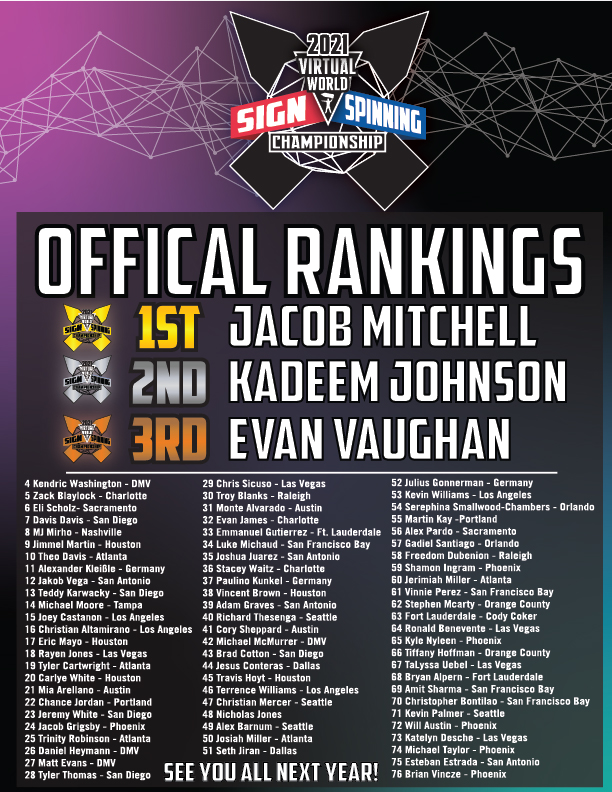