You are here:
BlogLatest NewsUSA 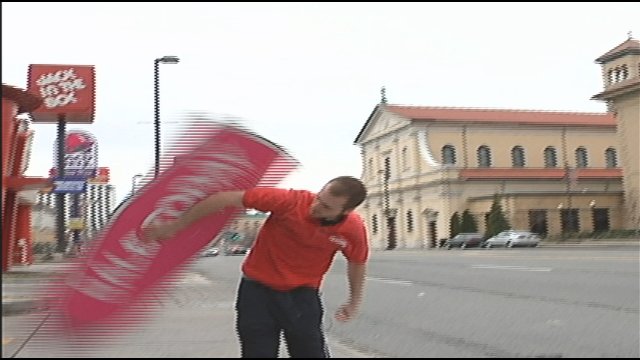 Putting a new spin on advertising

Rico El-lis, 18, started sign spinning for the outdoor advertising company in June 2011, and before he’d been with AArrow a full year he placed seventh overall at last year’s international competition and was named rookie of the year for the entire company.

Sign spinning is a type of advertising in which “spinners” attract motorist and pedestrian attention to businesses and events by performing stunts with large signs, typically made of cardboard, bearing the advertiser’s name or logo.

Diehl – who opened the Charlotte AArrow franchise in February 2010 – said sign spinning is as much an extreme sport and performance art as it is advertising.

“We had a list of 12 tricks when the company first started out and raised that to over 500 tricks. We record them and put them in a ‘trick-tionary,’ ” Diehl said.

El-lis qualified for this year’s Las Vegas competition after winning the Dec. 8 competition in Charlotte. El-lis now will go up against nearly 80 competitors from the U.S., France, Australia, Korea and Croatia, said Diehl.

“There’s some stiff competition. A lot of guys are bringing new stuff to the table, new tricks,” said Diehl. “But (Rico) has got some tricks up his sleeve, he’s been working to come up with some new tricks the other competitors won’t be doing.”

El-lis graduated from East Mecklenburg High in January and, in addition to working seven-hour shifts for AArrow, spends at least two hours a day coming up with new spin moves and practicing for competition, he said.

El-lis has been working to prepare 30-second and 45-second routines with gospel rap songs.

“I, too, am a gospel rapper,” El-lis said. “I’m the only spinner I know of that spins to gospel music, but I believe it helps me to be one of the best. I definitely include God in everything – in this, too.”

Some of the favorite tricks El-lis is incorporating into his routines are the scissor catch – “You throw the sign in the air, do a handstand and catch the sign between your legs” – and the death roll, “Where you tuck and roll with the sign,” El-lis said, noting it’s not a trick to perform on pavement.

El-lis had no gymnastic experience prior to his start in spinning and earned a few bumps and bruises along the way.

“This sign will hit you every which way, you’ve just to take it and keep going,” said El-lis, calling the mishaps “spin-juries.”

The first-place winner at last year’s competition received $5,000. El-lis said that if he wins any prize money, he plans to put it toward a car, savings and tithes.

In addition to the competition portion of their upcoming trip, Diehl said, the three-day conference will include workshops ranging from business management and marketing to graphic design and new spin moves.

Diehl said he’s excited for El-lis – who is training to become the general manager in Charlotte – to be able to attend.

“I’m excited to see him grow as an individual and grow in a manger role. He’s getting his feet wet.”