Back to Blog Home Posted by Arnaldo Acosta on 2.20.17 in Houston, Latest News, Los Angeles, News


SPORTING A BACKWARD ASTROS CAP AND A HUGE SMILE, Stephen Bell bobs his head, shakes his hips and twirls a Now Leasing! arrow-shaped sign as drivers zoom past him toward the I-10 entrance ramp off Yale Street. He’s on the clock promoting Alexan Condominiums. But, Bell says, he’s not really working. He’s performing.

“Smiling at people makes me happy,” shares the slight-of-stature, 23-year-old Acres Home resident, who never stops dancing as he chats with us by the noisy street.

He launches into a one-handed cartwheel, sign in tow. We want to know: What’s he listening to? “The Macarena,” he tell us. “Hey, whatever gets me going!” With that, he lands a dismount with an Uncle Sam–style point at a passing Honda Civic. For the briefest moment, right before the driver makes a turn, Bell’s routine puts a grin on her face. He smiles back giddily, gives her a thumbs-up and continues with his routine. This, he tells us, is success.

“I love my job,” Bell says. “People are always shouting that I’m doing great. Sometimes, they even stop and give me a bottle of water to say, ‘Thank you.’ I was a dancer in college, so this goes with my flow.”

In Houston, it’s hard to throw a rock without hitting a sign spinner, or, as they’re called in the industry, a human directional. With more than 26,000 new apartment units added to the city’s subpar market last year, developers are eager to fill their buildings. But it’s not just apartments spinners promote. More and more businesses—whether they’re hawking tax help, mattresses or “Hot-N-Ready” pizza from Little Caesars—are resorting to so-called guerilla-marketing strategies.

Bell, a veteran now in the Army Reserves, has been spinning signs for a year and a half for AArrow Advertising, the largest company of its kind in the world, whose spinners have promoted thousands of international brands including Uber, Toyota and McDonald’s. Today, the Los Angeles–based company, founded in 2002, employs more than 2,500 spinners across the world, with more than 100 of those in the Bayou City.

“Houston has one of the largest established teams of spinners,” shares Christian Altamirano, a general manager at AArrow’s corporate headquarters. “It’s home to some of the best spinners in the country.”

The average spinner, he tells us, starts off making between $12 and $15 an hour, with the potential for performance raises every three months. Top employees can make as much as $20 an hour, with growing opportunities for managerial roles—he himself started as a spinner just shy of eight years ago. 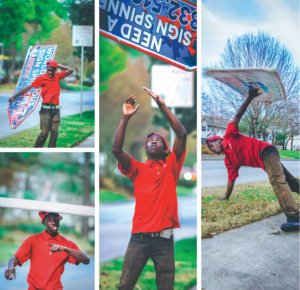 “We treat it like a sport with advertising objectives,” says Altamirano. And the vocation does have its rules: For example, after a trick like Bell’s signature cartwheel, you need to pause with the sign, point at the target, smile at the target and repeat.

In addition to spinning, Bell works as an instructor for AArrow, teaching new employees moves from the company’s arsenal of more than 100 signature tricks. His enthusiasm calls to mind a CrossFit loyalist: He loves advocating for what he does almost as much as doing it.

“It’s an awesome job—I also love the brotherhood. I’m friends with other spinners,” says Bell. He works seven days a week, in shifts lasting up to nine hours, with two 30-minute breaks. That level of strenuous activity—often in the Houston heat—isn’t for everyone, of course. In fact, it’s not for most people. But Bell shrugs that off.

“I feel like I’m giving back to the community,” he says. “People get sad, and I can make them smile. Once, a lady pulled over and said that her mom died. She shared that she really needed to see my smile and dancing that day. That’s what I’m here for.”