In the parking lot of AArrow Advertising’s Tampa office, they aspired to “the nunchuk,” “the Bruce Lee” and the “slip and slide.” But first, they’d have to master the basic combo: point, smile, wave, six count, point, smile, wave.

Dennis Rogers, 22, was having a little trouble. His sign flopped to the asphalt.

“Your rotation is a little too fast on the helicopter, when you get right here,” said Kaadeem Grant, moving Rogers’ hands into place. “And your grip should be right here.”

Rogers tried the move again. He spun the sign slowly, but this time, didn’t drop it. His stepfather cheered from the sidelines.

Standing by the road in the heat while breathing exhaust fumes and hoisting a hunk of cardboard over your head for $10 to $12 an hour is not what most people want to do. Even spinners who have dedicated themselves to it admit they never imagined doing it longer than a few weeks.

Now, they say spinning is fun, rewarding. They even feel a bond with their fellow spinners. And they understand that people outside the sign spinning community just don’t get it.

Based in San Diego, AArrow Advertising employs around 2,500 spinners in 40 regions across the United States and several other countries, twirling signs for everything from mobile phones to Discovery Channel series to Snoop Dogg albums. Locally, their biggest client is CalAtlantic home builders. 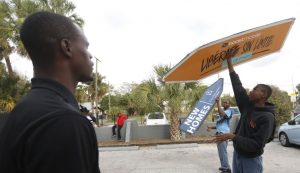 Grant is one of those spinners. He has been doing it since 2008.

As one of the best in Florida, the 25-year-old AArrow general manager will compete in the 10th Annual World Sign Spinning Championships in Las Vegas this weekend.

Spinstructor Alex Griego, 29, who just moved from Los Angeles, will be there too, competing against nearly 100 spinners from as far away as South Korea with hopes of claiming the $5,000 top prize. This year, for the first time, the competition will be streamed live on Facebook.

After eight and three years in the spin game, respectively, Grant and Griego long ago surpassed the basics they taught the new guys at Tuesday’s practice. Their repertoires include dozens of complicated acrobatic tricks, some they’ve invented themselves.

AArrow’s corporate office keeps a master list of named, sign-spinning tricks that now numbers more than 500, though the guys at the Tampa office seemed sure it was closer to 700.

Martell Edwardson, 29, also qualified for Vegas, but is staying behind. Someone has to work. He demonstrated his move, the “upside down cake,” flipping the sign over his back, standing on his hands and catching it with his legs. At a freestyle session in the AArrow lot, something akin to a break-dancing battle, he threw a sign in the air, removed his cap, and let it land on his head where it continued spinning.

They all share stories of bad days (a dead battery on your phone can mean spinning without music), but mostly they talk about what they consider the fun stuff.

They’ve been flashed by cars full of women, had wads of cash thrown at them and had run-ins with local celebrities. Edwardson was spinning a sign in Clearwater when he saw Hulk Hogan at an intersection. He performed a “power bomb,” a trick based on the wrestling move of the same name. Hogan honked.

Grant often has interested women approach him while spinning. He slips them his AArrow business card.

The contest is a marketing thing.

AArrow doesn’t deny that. The championships are a perk for AArrow employees, who get a free trip and hotel room out of the deal, and, the company admits, a clever piece of publicity for AArrow’s services. As a sport, sign spinning has no official sanctioning body, and competition isn’t open to spinners outside the company.

The athletes, however, are undeterred.

“We’re very serious about this as a sport,” Griego said. “I knew this was something serious the first time that I was with a group of spinners who’d just finished their six-hour shifts, came back to the office, and then stayed in the parking lot all night spinning for fun.”

Grant has been putting in hours of practice at night, taking video of himself with a Go Pro camera.

“I watch it like a coach watching game film,” he said. “So, say I like the way I went into a trick, but didn’t nail the finish. I can go back and see what happened. I can make adjustments. . . . My goal is to be sponsored by Red Bull.” 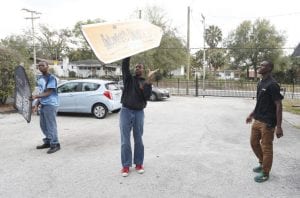 Many sign spinners don’t last long. AArrow’s vice president of sales and marketing, Joe Ambert, estimated half of the recruits that come in realize it’s not for them, but those who make it past three months typically “stay for years and years.”

It would be very hard to make a living as an entry level spinner, but Ambert said it’s possible for managers, who always start out as spinners, to do okay. In fact, most everyone in the company, all the way to senior management, started spinning signs, except for three employees: the lawyers who serve as AArrow’s in-house counsel.

Grant, Griego and Edwardson are all managers now, and only occasionally take a shift spinning by the road. They mostly recruit, train and drive spinners to their spots, and take home between $700 and $900 every two weeks. It could be more if they bring in new clients. Edwardson drives for Uber in his off time.

“I’m staying with it,” Griego said. “There’s a lot of opportunity.”

Edwardson has been in commercials for Taco Bell and the Ford Fiesta spinning a sign.

“Taco Bell, that was $15,000 right there,” Edwardson said. “I just kept getting residuals checks.”

And sign spinners from AArrow have been popping up in other pop culture. There are the segments on Tosh.0 and Stephen Colbert’s show, as well as the pages of trick videos on YouTube, some with hundreds of thousands of views.

After practice, Edwardson sat inside the AArrow office, grey block, with bars on every window. Inside it was more like a clubhouse, with an XBox, a big TV and a banner with the AArrow logo, which looks a lot like the Major League Baseball logo. He was watching a DVD of sign spinners competing, set to pumping EDM music. Kadeem Johnson, three-time world champion, and by many accounts the Michael Jordan of sign spinning, was on the screen.

“He’s more of an inverted style spinner. That last guy was more technical,” Edwardson said, staring at the screen.

But out in the light of day, spinning was not bringing the same euphoria to everyone. Jobs, after all, are jobs. In the end, they’re what you make of them.

Cameron Reed, 16, had just finished his first practice. Didn’t he want to learn the advanced tricks?

He walked quickly out of the security gate and down the sidewalk, no sign in sight.