In a crowded market, companies have to work hard to grab customers’ attention.

Watching someone throw a 6-foot sign in the air, do a handstand, then catch it — that’ll get your attention.

Jackson Hewitt Tax Service has hired AArrow Sign Spinners to direct customers to its new office in Pascagoula and its office in Gautier. 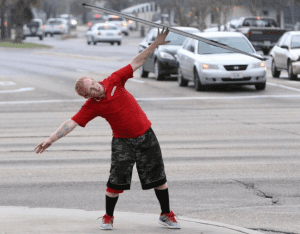 Sign spinning is an example of guerrilla marketing, which employs unusual visuals in a low-cost advertising campaign.

But the skill has also grown into a bona fide sport with an annual world championship. This year, spinners will compete in Las Vegas in February.

Thomas Pinckley, 20, who was working at U.S. 90 and Market Street in Pascagoula last week, said he’s aiming to be a top 10 finisher at the competition this year.

The spinners work from a “Tricktionary” of 300 tricks, said Carlos Sachitano, sales director for AArrow’s Houston office, and the more tricks you can do, the more you get paid.

“It’s definitely not a skill that everybody has,” Pinckley said.

Sachitano said they often recruit spinners through military ROTC and color guard programs. He called that union “a natural fit.”

“Its not something you see everywhere,” Pinckley said. “You don’t always see somebody with the skill to spin a 6-foot sign on their head.

“It kind of amazes people.”

Green said the service is much better than hiring a temporary worker to hold a sign.

“They attract a lot of attention, especially at a busy intersection,” Green said.

Green had the spinners out in the afternoon to catch the Ingalls Shipbuilding afternoon shift-change traffic. 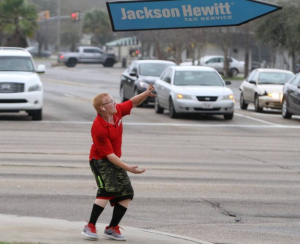 He said New Horizons successfully used AArrow for franchises in Florida and North Carolina, so when they bought some new franchises in Mississippi, he decided to give them a shot here.

It’s the first time AArrow has worked on the Coast, Sachitano said.

The company was born in a Georgetown University dorm room in 2002, and now has franchises across the world.

Pinckley had motorists entertained, soliciting approving honks from cars at a red light.

Six years ago, he had never heard of sign spinning. Now he is an account manager from the Houston office and has traveled from Los Angeles to Washington, D.C.

“A lot of people have sports that they get into and they try to go somewhere in it,” he said, “and I’ve gone somewhere with it.”