You are here:
BlogLatest NewsNewsUSA 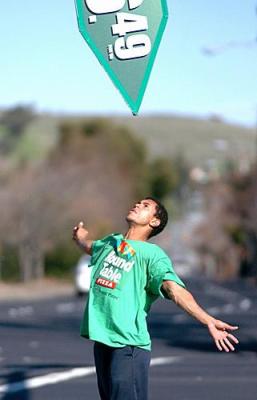 DiJon Rice doesn’t just stand there with a sign advertisement on a street corner, in a faux coma, with iPod earbuds in his ears.He spins the sign, and people watch. They stop to watch. And many read the ad.Rice is the top-ranked sign spinner for San Diego-based AArrow Advertising LLC, which has taken the relatively new ad genre in a decidedly different direction. Rice gets his moves from some 250 that were thought up and listed in a proprietary, copyrighted “trick-tionary.”

He does the “captain blender,” passing the sign behind his back and then over his head, and quickly. Then he does the “helicopter toss,” sending the sign aloft and deftly catching it when it returns to earth.

“The more I do it, the more fun it becomes,” said Rice, between spins recently at the busy intersection of Treat Boulevard and Oak Grove Road.

“It was either I do this or work a construction job,” said Rice, 22, originally from Las Vegas. He hopes to earn enough money to buy a house in Idaho or Wyoming and raise mastiffs.

He makes $20 per hour. Motorists stop, stare, smile, wave, yell and honk. One even pulled into a nearby gas station parking lot to give the guy a cupcake on Valentine’s Day.

Rice — who pronounces his first name dah-ZHAHN, so as not to be confused with the mustard — just smiles right back and engages his captive audience while they wait at traffic lights.

But they don’t get by him without wondering what the sign says, which is the whole point.

Round Table Pizza hired AArrow sign spinners for a two-week test last month at about 20 outlets, half in Northern California, the others in Southern California.

“We had half of our restaurants increase in the number of lunch buffets purchased,” said Renae Scott, Round Table’s chief marketing officer. “This company has some awesome people.”

At the outlet Rice was spinning for, a Round Table on Treat Boulevard, customers responded immediately, either by calling or walking in because they didn’t know about the buffet. No one complained.

“There are a lot of small companies doing sign holding,” Mike Kenny, AArrow co-founder and chief operating officer, said in a telephone interview. “We’re the only ones that have taken it to this level and turned it into a sport,” he said.

Kenny and Max Durovic came up with the idea in their teens.

“We were part of the Southern California extreme sports culture,” Kenny said. “We were so bored we started doing things with these signs.

So they went to college — Kenny to San Diego State and Durovic to Georgetown University in Washington, D.C.

Their marketing professors told them to try to start their own business. They did in 2002, with $100, which included the cost of their first sign. Last year, their revenues were $3.2 million and they now spin in nine cities and the Bay Area: Phoenix; Las Vegas; Miami; Raleigh, N.C.; Atlanta; Washington, D.C.; New York City; San Diego; and Los Angeles.

“People don’t feel like they’re being advertised to,” said Kenny, who views the spinners more as entertainers and athletes than advertisers. “That’s what we’re about, we make these spinners the stars. That’s a huge boost to them. You kind of go out on a stage.”

They’ll soon be sending spinners to Paris, as in France, for a month for a restaurant opening, said Kenny, who closes his e-mails with “spin-cerely.”

AArrow offers flexible schedules, ranging from 10 hours to 40 hours per week. Rice’s Round Table gig was three hours a day.

AArrow has 700 part-time spinners and 50 full-time employees, including managers. Kenny is 23, Durovic is 24 and everyone is younger than 30. Every employee spins, including Kenny and Durovic. “You can’t ask someone to go do something you’re not willing to do yourself,” he said. “They’ve latched on, they’re loyal. That’s really a big thing.”

And they have a pecking order.

In AArrow’s first annual spinning contest in San Diego, Rice beat out his instructor, won $1,000 and now trains other spinners.

Reach Scott Marshall at 925-945-4782 or smarshall@bayareanewsgroup.com.