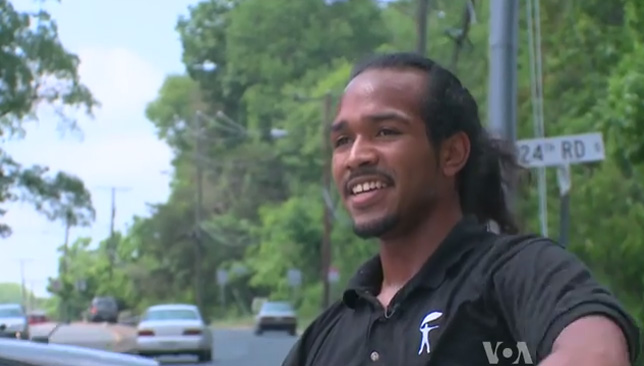 WASHINGTON – You’ve seen them on the street corners. They spin signs of all shapes and sizes. Sometimes they do flips, or throw their signs into the air — whatever it takes to get your attention as you drive by.

These characters are popping up all over the D.C. area. They’re called sign spinners. And sign spinning is growing as a sport or hobby worldwide.

Ezequiel Munoz is the operations manager of the D.C. and Maryland market of AArrow Advertising, a company that calls itself the “world’s largest guerrilla marketing franchise.”

Munoz trains young sign spinner recruits, giving them both instruction and inspiration. He started spinning at age 16 because he needed money in high school. Now he’s 22. Even though he never thought he’d still be flipping signs, he says won’t do anything else.

After all, he’s competed against other sign spinners and has even spun for Snoop Dogg.

WTOP went to witness a sign spinning practice with Munoz, and even had a go at the sport.

So why did you start?

I needed money to buy stuff and save money in college. As a sign spinner in high school, you’ll get $100 or $250 every two weeks. That’s money you can easily save up for anything.

I would say for young people. Age 14 through pretty much anybody in high school, college too. But if you’re an adult, it can’t really be a main income source.

The first time I went out to the middle of nowhere in southern Maryland. You relieve stress out there. You just relax. The fact that you’re out there getting paid to listen to music and exercise — what else can you ask for? The schedule’s flexible. It’s somewhat easy money.

When do you spin?

Why do you do it?

You get paid to exercise and listen to music and I looked for that as a kid. I didn’t want to go to McDonald’s. This job, it’s just you and your music — you just show off and get attention from people. They honk. It feels like you put a smile on somebody’s face, so you feel good for that moment.

It looks like you do fancy moves. What else is there to it? Is there a strategy?

There’re a lot of moves, some crazy moves. We do moves to catch peoples’ attention. Like a back flip — you wouldn’t do that and keep doing it. You would do one, and then freeze with the sign and show it to the person you’re targeting. You’d make sure the sign is right-side up and wave at them.

It’s mostly muscle memory. People who do back flips and stuff have an advantage.

To see some of Munoz’s moves, check out WTOP’s video:

How do you qualify?

You have three sessions of training right before you start. We go over how you interact with people, how you behave while working and your work ethic. After that, if you want to stick around with it, you gotta get better, put more hours in.

You get paid per hour. You start at $10 an hour and go up to $20. It’s competitive. It depends on your performance on the street corner. Every time someone works, one of the other managers or I will score that person and how his/her tricks are and how clean they are. Are they smiling? Dancing? Every three months we add up all those scores and the employee is paid accordingly. We like to keep it competitive so everyone has the chance to make more than $10 per hour.

What amount do you make?

I don’t spin anymore. I’m at $19 pretty much forever now cause I went into management.

How long did that take?

I would say it took me about five years, but a lot of people who are at $20 now are out of school so they have more time and hours to practice, so they get there faster.

Some kids can pick up sign spinning really quickly because they’re good with their hands. They’re good when they get that reaction ‘Oh, that’s awesome,’ or ‘Did you see him do that?’

Some kids confuse themselves. If he’s spinning only, that’s bad. If you can’t read the sign, you’re spinning too much. We’re trained to spin a lot, but pause at the correct moment. But at the end of the day, you gotta put some effort into it and you gotta stick with anyone who tries. It’s not that hard to do sign spinning. They’ll eventually get it.

You don’t discriminate. We say you should aim for eight out of 10 cars you see in front of you at a minimum. Obviously you can’t get every car without looking like you try too hard. If you say ‘Look at me; look at me,’ you look desperate.

How do you measure your success?

It depends on the feedback. They’ll say, ‘People paid attention,’ ‘We had a lot of people come in today,’ or ‘Nobody came in, but we got a lot of calls.’ If you’re good, people call even just to give a compliment to a spinner, or because they want to patronize the business.

Whose signs do you spin?

Anybody’s a potential client for us. Mostly apartments and home developments — anybody we think could benefit from our service. We make a contract with them and charge $45 to $35 per hour. We’ve worked for Snoop Dogg before.

Really? What did you do for Snoop Dogg?

We were spinning his sign for some album three or four years ago.

You have to send me a video.

What else do you guys do?

We have local competitions just to build up a rivalry here, just for bragging rights. Then we’ve had the national competition in Las Vegas for the last 10 years. Last year, one of our sign spinners won first.

How do you win?

It’s based on your tricks and style. It’s just for fun. It doesn’t affect your wage at all, but you do win money and bragging rights.

Have you ever won?

Where do local sign-spinners spin?

We have sign spinners in 10 countries already. It started in California. Across the globe we prob have 2,000 spinners. We started in South Africa this year.

Where can we find you?

It’s not my duty anymore, but I usually do spin a sign when we’re overbooked. I’ll spin on 14th Street or in Prince George’s County. We try to send spinners close to where they live so they don’t have to travel two hours to get there.

Did you see yourself years ago still sign spinning now? Will you ever stop?

Right now, it’s take it or leave it. I’m doing it for work experience. I could be a franchise owner for this. There are a lot of opportunities in the company to move up.