A Few Words with the 2012 WSSC CHAMPION! 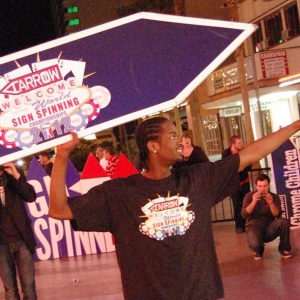 We had a moment to sit down with Kadeem Johnson, the 2012 World Sign Spinning Champion, shortly after his upset victory in Las Vegas. Kadeem has only been spinning for about a year and a half, which made him an underdog in this year’s championship.

Kadeem was born on April 29th, 1991, in Montgomery County, MD. He still enjoys showing off for the hometown crowd, and his favorite place to spin is Rockville Pike, MD. “I made a $40 tip there” says Kadeem.

Kadeem joined AArrow in the summer of 2010.  Luckily for our sport, he was friends with Spinstructor Horacio Moreno.  Kadeem says ” I was friends with Horacio and he worked at AArrow and offered me a job. He showed me a couple of videos of people spinning, and I was instantly hooked on it. Shortly after, I had a interview with Geoff Genereaux, he hired me and showed me the Basic Flip and Basic Spin”.
Thanks Geoff for training the 2012 World Champ! (at least on the basics)
Kadeem enjoys spinning every day, and is already practicing for the 2013 championships. He says he’s invented new tricks that most spinners have yet to see. Sorry AArrow spinners – he plans on keeping them a secret until next year’s competition. His current favorite tricks include “The X Spin” and the “Helicopter Toss Flare”.  Kadeem used part of his $1000 grand prize to purchase a brand new HTC EVO 3d. We can’t wait to see those moves in 3D!
Kadeem’s favorite songs to listen to while spinning include:
LL Cool J – Headsprung
Movado – Final Destination
Baby Bash & Akon – Baby Im Back
Kadeem hopes to travel to the Hollywood market to see if he can use his status as the “World Champion of Sign Spinning” to land an appearance in a commercial or even a movie gig.
We look forward to seeing the future success of Kadeem Johnson and making him the next superstar of AArrow Sign Spinning.
Categories: Blog, USAFebruary 27, 2012
Share This Article
Share on FacebookShare on Facebook TweetShare on Twitter Pin itShare on Pinterest Share on LinkedInShare on LinkedIn