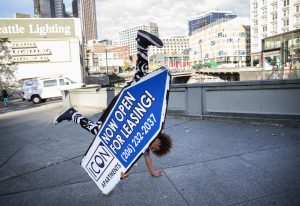 The 17-year-old has been working for Aarrow Sign Spinners for about a year, commuting by ferry from his home in Bremerton to perform his sign acrobatics as cars and buses rush by.

“People come up to me all the time,” Zueger says. 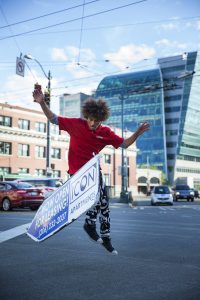 They want to know how he got so good at sign-waving. Some ask whether his company’s hiring.

“The main thing I tell myself all the time is, ‘Keep going,’ ” Zueger says.

And therein lies the core message for anyone who hustles to make a living: No matter what, make it work.

“Hustling” has long since outgrown the gritty stereotype of the street-corner entrepreneur selling items out of a car trunk or doing odd jobs to put food on the table — or the starving artist, musician or actor busing tables and slinging hash by day to pay rent.

Today, the so-called gig economy has become a desirable, necessary and in either case permanent condition for millions of American workers.

In fact, recent surveys by the Federal Reserve Bank indicate that many people who do gigs have annual household incomes above the national average of about $53,000.